October 27, 2018
My son has been playing the popular game called Fortnite www.epicgames.com/fortnite/ on PlayStation 4 for many months now. There is social component to the game where a team of players collaborate by using their headset and microphone in their party/group chats. One day, the microphone on my son’s headset stopped working in Fortnite.  The troubleshooting that father-son had to go through to fix the issue is worth blogging about because I couldn’t stand seeing him get declined from Battle Royale party invites and just playing the game solo which isn’t as fun. For a few days, he would FaceTime his friends on our iPad so that they can talk on the side while playing Fortnite on PS4. You probably won’t want to go through that scene as well so I thought it’s time to put in some of the troubleshooting skills that we are so good at and put that to good use so that others can benefit from our experience. Here are 4 phases you will likely go through to try and fix this.

1) The first thing that comes to mind is to replace the defective microphone with another proven working one. So I went and used my iPhone headphones, plugged that in to the PS4 controller and was amazed it didn’t work. This got me curious so I tried his old headset on my iPhone and used the microphone to call my wife’s cell phone. That worked well so there was nothing wrong with his old headset and my iPhone headphones.

2) The problem is probably with the game itself. Just like in Skype conference calls, others can mute participants at will, so I suspected that my son’s mic was probably muted during one of the party chats. We searched within the Fortnite application settings where that may be. We looked at YouTube videos to see where we can test the mic and also read some of the FAQs and forums on Fortnite’s website. Since we couldn’t find where his profile might have been muted, we decided to delete the game and re-download/re-install it to attempt a fresh start. I posted a tweet on Twitter and Instagram to get some confirmation that his data and purchases will not get deleted as well as the skins we purchased for $13 from the online store. I also posted a question to the Fortnite support on the Epic Games website, haven’t heard back yet. Most of what I heard and read says that the data should be safe as it is all stored online with his profile account. Crossing our fingers, we deleted the game and waited 3 hours to re-download and re-install the game. After logging back in, all the data including previous purchases were still there (thankfully) but the mic was still not working for both microphones we have been testing with.

3) The problem is probably with the PS4 console itself. We combed through all the audio settings to see if a recent patch corrupted the drivers used for the old mic my son was using, or if the mic test bar flat lines just like it did in the game. The mic test on his old headset did not show any activity. Although there was some slight activity on mic test bar for my iPhone headphones, I couldn’t hear my voice and there was a screeching high-pitched sound each time I talked through the mic. I later learned from a BestBuy salesperson that this was normal for iPhone headphones due to its proprietary nature. So it is looking more and more like the issue is with the mic not working on PS4, although it works on my iPhone or mp3 player. I was going to open a support ticket with PlayStation helpdesk but since I subconsciously didn’t want there to be any issues with the more expensive PS4 console, I went back to my son’s initial suggestion that the mic was the culprit.

4) Go back to #1 and assume it’s the mic. My brother-in-law is also a gamer so we went to borrow the headset he uses for his PS4 so that we have a third mic to test with. It was a KOSS headphone and surprisingly it worked. It was definitely the two mics we were testing with that was the issue. Problem solved. We went to BestBuy and bought this $39 PlayStation Afterglow LVL 3 gaming headset because we wanted to make sure we didn’t spend anymore time on this.

Hope this helps you out. 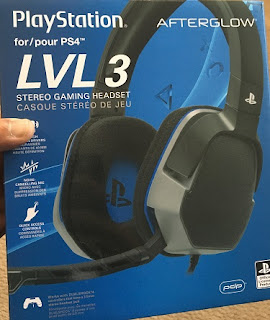 Popular posts from this blog

60 Days of Udacity: A Bertelsmann Technology Scholarship in AI

December 15, 2020
I applied and was recently awarded the Bertelsmann Technology scholarship where a group of students take part in an Artificial Intelligence track made up of 5 parts to be completed in 3.5 months.  As part of taking the class, we have to take part in a slack channel where we post our daily studies for 60 days reflecting on what we have learned. This is a transcription of those 60 days. The public github wiki is located here https://github.com/chromilo/udacity-bertelsmann-scholarship/wiki  Day 1:  I am in p3  (Datasets) doing the xray annotation project. I have created the appen job using the "Image Categorization" template. I uploaded the xray image data and modified the CML to make the  questions specific to checking for pnemonia. Also updated the Examples section. I am still working out the usage of conditional only-if in checkboxes to determine what other smarts to include when annotators go through the page. Created one Question so far and will continue working on the othe
Post a Comment
Read more

Unable to get to computer BIOS because monitor goes to sleep at startup?

August 27, 2020
I just enrolled in a course that requires running virtual machines on my Windows 10 Pro computer using VirtualBox. I couldn't start the virtual machines because of this error "The native API dll was not found (C:\WINDOWS\system32\WinHvPlatform.dll)". After doing some troubleshooting, I found this to mean that the hardware acceleration settings required by the CPU to support virtualization are currently disabled in my computer BIOS. I had to enable virtualization on my CPU chipset (VT-x/AMD-V).  Seems easy enough, right? I rebooted my computer and was expecting to see the memory counter and options to get into the BIOS. It must have been so quick that it took me straight to Windows 10 login prompt right away. I tried again and as usual I am immediately back to Windows 10 login. Each time I reboot, there is a box that says my monitor is going to sleep and does not wake again until presented with Windows 10 login prompt. I can hear the disk and fans spinning during startup,
Post a Comment
Read more

Chromilo
Vancouver, BC, Canada
Online blogger with a passion for fitness, food, drinks, finance, and community.